03.02.15 - On 13th of March 2015 the High level Conference on e-Skills will take place at the Latvian National Library Building in Riga. This event will represent the official launch of the "e-Skills for Jobs 2015" campaign, held under the Latvian Presidency of the Council of the European Union.

The campaign is an initiative of the European Commission. It is aiming to raise awareness to address a shortfall in the number of European citizens with professional digital skills (e-skills). The event is organised by the Latvian Information and Communication Technology Association (LIKTA), DIGITALEUROPE and the European Schoolnet with the support of Grand Coalition for Digital Jobs, Cisco and Microsoft.

Announcement of Get Online Week 2015

01.02.15 - The annual Get Online Week (GOW) will be organized this year again in the last week of March and will encourage and support people to use the Internet with events and trainings. In 20 European countries the GOW will motivate people who are not yet online, to use digital media and will raise awareness for the advantages and risks in the digital world. From 23rd till 29th of March 2015 everybody is invited to participate and get online.

The new EU-funded project Online4EDU had its first Partner meeting 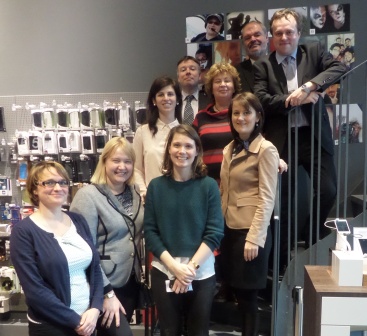 30.01.15 - The new EU-funded project Online4EDU had its first Partner meeting on 13th and 14th of January 2015 in Berlin, Germany. Five partner organizations form Estonia, Latvia, Lithuania, Ireland and Germany met in the capital city to discuss the first steps of the project, that include national surveys, the creation of the blended learning curriculum and dissemination.

The project Online4EDU is only in its first phase but the consortium is already enthusiastic about it. During the meeting, that was hosted by Stiftung Digitale Chancen, the five partner organizations paved the way for the course of the project and discussed what is going to happen in the next months. A big part of the work will be to address school teachers as the target group of the project. A survey will be conducted in order to assess if and how teacher use online collaboration tools and what knowledge they would like to acquire regarding these tools. The survey will be carried out on national levels in Estonia, Latvia, Lithuania and Germany as the piloting countries. All teachers will be invited to take part in the survey in order to gain a full overview of the topic. As soon as the survey starts, the consortium will disseminate the questionnaire.